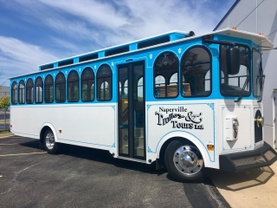 The History of Naperville Trolley & Tours

Annette was born at Edward Hospital, in Naperville, IL. The 6th child of Don & Jean (Knoch) Wehrli. The first "Knoch" grandchild of Hon. Judge Win & Irene Knoch to be born at Edward, and the second "Wehrli" grandchild of Joe and Gertrude Wehrli to be born at Edward. (It used to be a tebrbuculious sanatarium prior to that, and most births prior to Edward took place in Aurora.) She was brought home to the family home on Ellsworth Street, where Mary Lou, Win, Fred, Jill, and Francie greeted her. They soon outgrew that home, moving to Wright Street in 1966. Grant joined them a few years later. Seven children, 9 total with Don & Jean. The house was full of love, and the entire neighborhood was invited to play in the yard, as long as everyone picked up before going home. Annette attended Highland Elementary, until the boarders were shifted, which moved her to attending Ellsworth Elementary for 1-5, walking home every day for lunch and some Bozo on TV. Off to Washington Jr High she went, to became a "Washington Warrior". Volleyball was her sport, and WJHS went undefeated during her time there! Naperville Central High School was next for some GREAT education and fun, graduating in 1981. "Raising he--, and having FUN, we're the Class of 81!"

After taking some time to work and save for tuition, she attended Illinois State University, graduating with a degree in Criminal Justice. Like her mother when she attended U of I, Annette became a member of Kappa Delta Sorority. Annette did her college internship at the old Naperville Police Department that was located at 131 W. Jefferson, then stayed there full time for five years, working in the basement of the old building. Chief Teal was at the helm, and it was some of the best years of her life! When the PD moved to it's present location, Annette was not a fan of how the staffing was going to be shifted around, and moved into the City of Chicago to discover the Windy City! 10 E Ontario was her home, and working at the Marriott on Michigan Avenue as a cocktail waitress was her calling. A few years later, her marriage brought her back to the suburbs, and many years after that, when she chose to take on the role as a single parent raising her two awesome sons , she started working part time for her dad, Don Wehrli, at Naperville Trolley & Tours ("NT&T").

Don Wehrli started Naperville Trolley & Tours in 1995. He was retired, and went on a Trolley Tour while visiting Washington State for a family wedding. At 67 years young, he came home and ordered a Trolley. It was delivered on July 3, 1995. Don was known as the "Trolley Meister", and had a lot of fun driving for Weddings, Tours, & Holiday Lights. Everyone wanted to book the beautiful canary yellow Naperville Trolley for their special event!

In 1999, Annette was in search of employment. NT&T did not have a website or email, so after discussing technology with her dad, helped him get them set up. And so it began... This led to daily email checks, helping with phone calls, booking events, buying more Trolleys, and her getting her Commercial Drivers License so she could drive the Trolley. Part time moved to full time very quickly. Don enjoyed more golf and cards with his buddies.

On February 28, 2014, after watching Annette run the business at all levels, and "taking it to the next level", Don sells Naperville Trolley & Tours to his daughter Annette. The sale takes effect at midnight.

March 1, 2014 Annette becomes the proud owner of Naperville Trolley, and Don retires. He helped Annette during this year of transition, until his passing on March 17, 2015. He was 86. Her mother passed the following December, in 2016. They are both in forever in her heart, and guide her from above.

Annette now has two adult sons, Jack and Joe, and is very active in the community. Many call her the "Concierge of Naperville"!  Her favorite quotes "If you want something done, ask a busy person!" and "There's great satisfaction in making other people happy!"

Her son Jack is in Fireman School in Colorado, and Joe is studying Journalism at Illinois State University.  Annette decides, since they are both in school, then she should be in school too!  She has started the Masters in Business program at North Central College.  All three hope to graduate together in 2022! Fireman Red, Redbird, and Red Cardinal!

2020 was supposed to bring delivery of her 4th new Trolley, but because of Covid-19, Ford is not making chassis right now, so the new Trolley will have to wait until 2021 to make it's arrival.  2020 was also to have many Special Events with Naperville Trolley to Celebrate our 25th Anniversary!  We hope we can bring some to you all soon!!!

Naperville Trolley has the most beautiful Trolleys in the State of Illinois!  Not all Trolleys are apples to apples, that's for sure, so when you're "shopping", do you homework.  We have a wonderful "Photo Gallery" tab for you to see our fleet.

“Find a job you enjoy doing, and you will never have to work a day in your life."   - Mark Twain